On Monday the 23rd of April, we ventured out to the Isle of Wight. Also known as “Dinosaur Island”, it is famous for its dinosaur fossils and beautiful coasts. It is less known, however, for the rich seaweed communities which surround the island. Many people may grumble, turn around and leave once they find out the beach is full of seaweeds. Indeed, they are not the most pleasant thing to have a casual swim around, but they are very important both for humans and the environment. Fish, shrimp and other animals use seaweeds as their habitat, hiding from predators and looking for food. Humans also use them as a source of food or organic compounds used in cosmetic products or medicine due to their antimicrobial activities.

In any case, it is crucial to have a rapid and practical way of locating seaweed species and estimating the change in their abundance through space and time. This can help us understand their ecology, invasiveness and the effects of climate change or human activities on their distribution. Drones are becoming the next “big thing” in the field of ecology, as they are relatively cheap, easy to learn and can rapidly scan wide areas. Our ultimate dream is to fly a drone over a coast, analyze the imagery and obtain a good idea of the seaweed “architecture” beneath. Sounding a bit far-fetched? Well, at the Zoological Society of London (ZSL) and Natural History Museum (NHM), researchers strive to apply cutting edge science to understand and protect species in their natural habitats, using methodologies which can be easily accessed and used by anyone. With this in mind, on Monday the 23rd, we headed off for the Isle of Wight on a quest; a quest to find out whether we can use drones to monitor seaweed!

It was chilly in the morning, but the excitement was already building and before we knew it, we had arrived at the coast of Southampton using a ZSL van packed with all our equipment. The ferry ride was smooth and we arrived on the island relatively fast. The weather was quite shiny with a few clouds, but nevertheless, we had to act quickly to avoid any unexpected changes. Our first goal was to do a kayak survey on Bembridge coast to collect ground-truth data of the seaweed, data which can be paired with the drone images to construct predictive models of seaweed coverage. After hiring a double kayak from Tackt-Isle Adventures, we soon arrived at the nearest coast where we realized the wind would be our enemy for the day. Keeping the kayak stable was not easy, but we managed to use a few buoys as waypoints to design our survey. Every once in a while, we dropped the GoPro camera underwater to get a good glimpse of our targets and used a GPS to mark their coordinates. After the survey, we rushed with excitement to fly our drone. To our disappointment, a few connectivity issues meant we had to postpone our flight for the next day. Nevertheless, we returned to our accommodation, did lots of research to troubleshoot these issues and boosted our confidence. 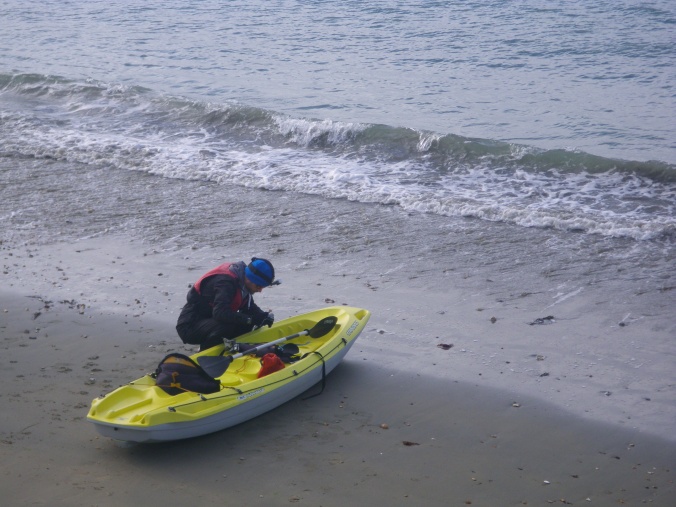 Figure 1.  Preparing to go on board!

The next day, we visited a rocky coast toward the south, where seaweeds were abundant. To our delight, the wind decided to be our friend this time and our survey was absolutely successful. We captured lots of videos of all our targets:  different species of brown, red and green seaweeds. We even had an unexpected surprise by a seal which was probably looking for food around the area. I would be lying if I said we remained absolutely focused on our goal, but in any case, the seal vanished and we eventually made it to the shore. 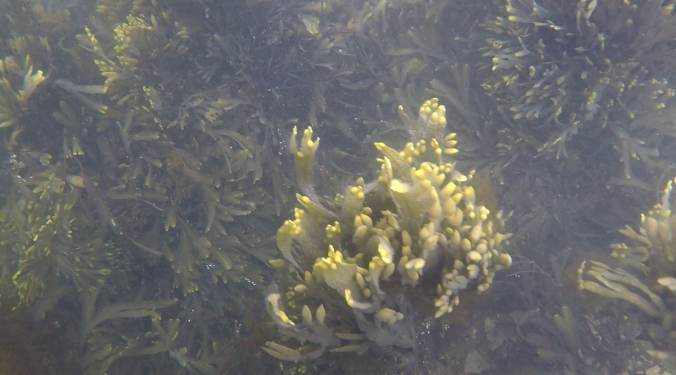 It was time for the drone survey! As soon as we noticed the mist approaching, we had to act fast to avoid losing sight of the drone. This time, our drone took to the sky and followed the predetermined flight path over our kayak survey route, taking images which would eventually be used to create a map! It was a fascinating moment, but we knew we had to return the drone as the mist was now too close. With the press of a button, well, a couple of times, the drone returned to the exact spot where it took off. Our goals were complete, so we packed our stuff and after a few hours, we were back in London.

We were happy to have successfully completed both our surveys and are confident that such approaches, followed by appropriate analysis, can be efficiently used for easy and rapid seaweed monitoring. Who knows what the future beholds? Well for now, we will take a rest and anticipate our next trip to the “Dinosaur Island”!