The executive summary from a report for the Crown Estate reviewing methods of monitoring Kelp abundance.

Kelp forests are an important feature of the British coastline, covering approximately 19,000 km2. Levels of biodiversity living in this habitat-forming biomass rival that of tropical rainforests. Kelp also has commercial uses in pharmaceuticals, food, and fertiliser, amongst others: studies cite kelp-based ecosystems to be worth billions of pounds. The northeast Atlantic is an important biogeographic zone for kelp, and the UK in particular contains 50% of known kelp species in this region.
There is increasing interest in wild-harvesting of kelp in Britain, illustrated by a growing number of seaweed and sea-containing products, sought after for their nutritious ‘superfood’ properties. Whilst commercial aquaculture operations are currently absent from Britain, research and development into establishing an industry are currently ongoing, particularly in Scotland and Ireland.
Evidence suggests that the distribution and abundance of kelp in Britain is changing, driven by variations in sea-surface temperatures enhanced by climate change. Yet, complex relationships exist between causal factors, justifying the need for a largescale monitoring effort, particularly of commercially-important species. Monitoring kelp poses many challenges, growing in difficult-to-access areas with often poor visibility and testing weather. This review will explore the research and methods that have been applied to monitoring this important oceanic flora in Britain.
In the past, quantitative research on kelp has been patchy and irregular. In a global review of ecological studies on kelp, only 7 out of 402 papers were from Britain. A number of data-recording projects have been set up to improve the disparity of data, including Citizen Science projects recruiting the public to go out and identify seaweeds. Occurrence records are often contributed to species distribution models, estimating suitable kelp habitat through associations with environmental variables.
Remote sensing is also being explored for aquatic vegetation, offering a large-scale, holistic approach that is cost-effective and saves time. Whilst both satellite and aerial imaging have shown to be effective, signals can be lost in murky water, and images do not account for changing tides. New avenues are being explored in acoustic monitoring, particularly multi-beam sonar, which are proving successful. However, these have only been tested on an ad-hoc basis, and a standardised rapid assessment technique for monitoring kelp has yet to be developed.
Given monitoring difficulties, kelp remains understudied in the northeast Atlantic, with great implications for the conservation and management of species that are both ecologically and commercially important. With an increase in wild-harvesting, coupled with ongoing climate change, it is vital that novel approaches are used to monitor the wild stocks of the British Isles. 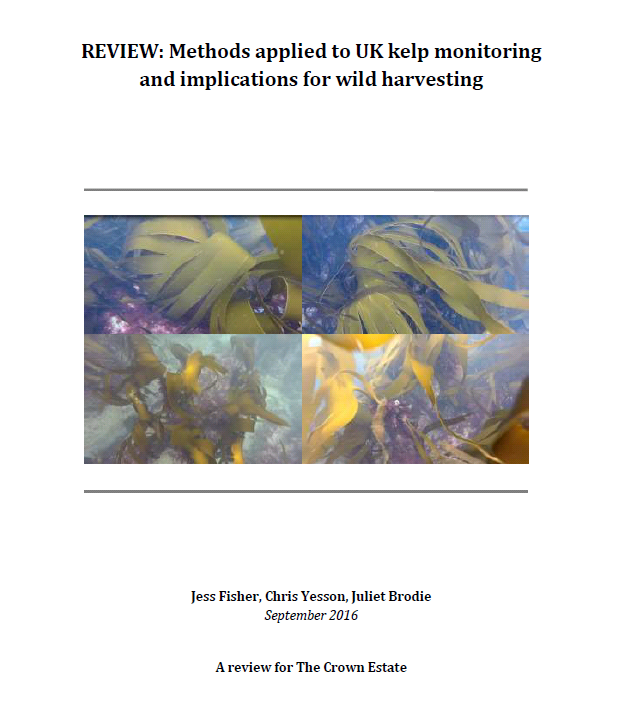